Stephanie Toussaint is a resident of Maplewood and a member of Columbia High School’s class of 2009.

She is brilliant. We met this academic year.  I witnessed Stephanie’s dedication to both CHS’ mock trial & moot court teams, and her well-executed performances during both competitions.

Stephanie shares in this interview what a phenomenal experience prom was for her. 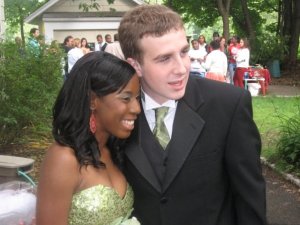 W. S. Hughes: What was prom like for you?

Stephanie Toussaint: Prom was amazing. It was like a fairy tale all night.

W. S. Hughes:  How long did you plan for prom? Did you make any special arrangements?

Stephanie Toussaint: I was thinking about prom ever since my 8th grade dinner dance. But I started planning a few months before June, near April.

W. S. Hughes:  What were the hours leading up to prom like for you?

Stephanie Toussaint: On the day of prom there was graduation practice, I had breakfast with my date, and got my hair done. After having my hair done I relaxed and got my make up done. Everyone on my bus went to my date’s house for a reception and took pictures with the photographer in his backyard.

Stephanie Toussaint: I went to prom with all of my friends in a party bus.  There were 45 of us.

W. S. Hughes:  How was your overall experience?

Stephanie Toussaint: Overall prom was beautiful.  Every aspect of prom was perfect. The country club was amazing and everyone was dressed to the t.

W. S. Hughes:   Would you do everything the same way again having had this experience?

Stephanie Toussaint: I wouldn’t change anything about prom. If I could I would just make sure that I start saving my freshman year because senior year is soooo expensive

Stephanie Toussaint is a Columbia High School graduate .  She is a co-founder of the Teen Dating Abuse Council, a club dedicated to educating the students in the South Orange-Maplewood middle schools about the dangers of abusive relationships. Prior to being the co-founder of the Teen Dating Abuse Council, Stephanie was an active member in her church, Eben-Ezer C&M Church for 8 years. Not only is she involved in church activities but also she was a member of a numerous clubs and activities in high school. She has been playing her violin for 9 years. Ms. Toussaint was apart of all the legal clubs; American Civil Liberties Union (ACLU), Mock Trial, and Moot Court.

This fall, Stephanie will start a new chapter in her life in a new state. She will be attending American University, in the District of Columbia, where she will study Justice in hopes of becoming a lawyer.

Look at the group of friends below. Aren’t they beautiful?!!