Update December 2, 2008.  Josh CinCotta, on of the two coaches of Sparkle Motion, our CHS girls Ultimate team, provided this URL for those interested in a list of all the Alumni Thanksgiving games  – starting 1970, and who each winner was: WFDF: History of Ultimate

Fellow Maplewoodians, I was freezing this past Thanksgiving due to a not so wise selection in clothing and footwear while I watched the 34? Ultimate Alum Thanksgiving game.  Someone who shall remain nameless called me out hard on where my gloves where…I didn’t have an answer. (Thank goodness he let the subject rest.  Thank goodness also a very kind South Orange resident (CHS Alum & RU parent) lent me his very warm gloves). Warmly enveloped into the group, I stood happy that [t]he coach emailed me about the 8:30pm game.  When I stepped out of the car I thought my contacts were frozen or something.  I didn’t expect to see so many people out at that time watching the game.  I had great fun standing among the current CHS students, alumni & parents that night.  Sadly we couldn’t yell; we were under strict protocol. But we didn’t need to.  It was pretty awesome watching the guys play.  I think it was only fair the alumni let the students win.  Ahhhhhhm.  I’m reppin ’00 hard!

If you haven’t gone to an Ultimate Thanksgiving Alum game yet…You don’t know what you’re missing until you find out what you’re missing.  This is a cult classic…  I wont give away the location.  In case you are intrigued, as any game individual might be, there are some under-cover, hard-core, & very in shape competitive student athletes walking around the streets of Maplewood.  (It was a 3 hour game of non stop running).  They play ultimate in the freezing cold and sleet…and they could clue you in.  I would ask one of them. 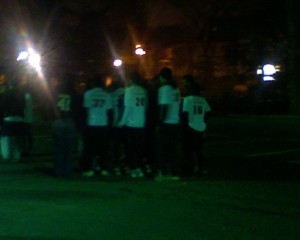